PublishPress is based on another WordPress plugin called Edit Flow.

Edit Flow was a wonderful plugin, but many of the key features were implemented in 2009 / 2010.

WordPress has become a different platform over the last 8 years. So as we develop PublishPress, we're updating some of the older Edit Flow features that need a different approach for 2018. One of those older features was the user groups.

In this post, I'll give you an overview of how Edit Flow/PublishPress used to handle user groups. I'll then explain what's changed in this latest release of PublishPress.

The old approach to user groups

Edit Flow (and the early versions of PublishPress), used a taxonomy to create user groups. When you first installed either of these plugins, you'd see four new user groups: “Copy Editors”, “Photographers”, “Reporters”, and “Section Editors”.

Unfortunately, using a taxonomy for user groups had some serious technical limitations:

The new approach to user groups in PublishPress

When you update to PublishPress 1.11, you'll see the message:

“PublishPress detected legacy data which needs to be migrated. This task should run in the background in the next few minutes.” 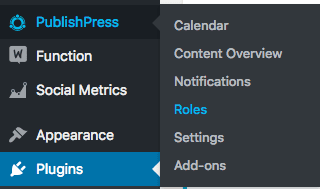 On this new “Roles” screen, you can create new roles and edit existing roles. There are two key things to note:

You can add users to roles when you create the roles. Alternatively, you can add these roles to existing users in two places:

It's worth noting that, unlike default WordPress, PublishPress allows one user to have multiple roles:

If you go into the “Notifications” area of PublishPress, you'll see that your Roles are now available in the “Who to notify?” section. Previously, before this update, we had to choose between either showing PublishPress user groups or WordPress user groups. 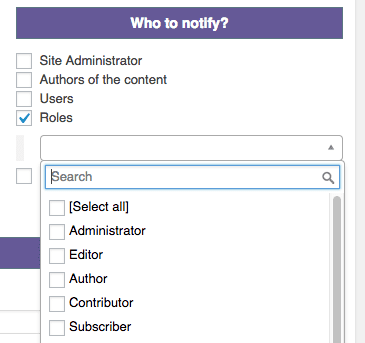 In earlier versions of PublishPress, there was a big, clunky box under the WordPress post editor. This box was hard to navigate. Plus, again – we could only show PublishPress user groups rather than WordPress roles.

Now this “Notify” box has moved to the sidebar on the post editor screen, and has undergone some major improvements. Using a slick search box, you can choose which users and roles are being notified about a post. For example, these users and roles will now get an email whenever an editorial comment is added, or the post is moved to a new status. 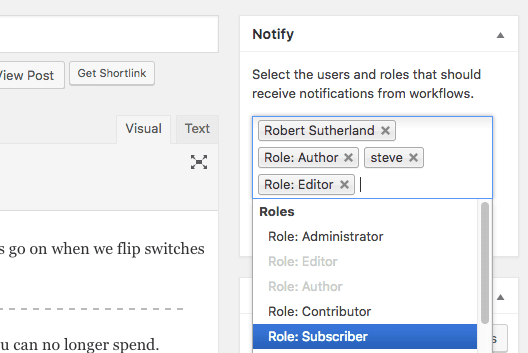 If you click the “Notify me” link next to content, your name will be automatically added to this box: 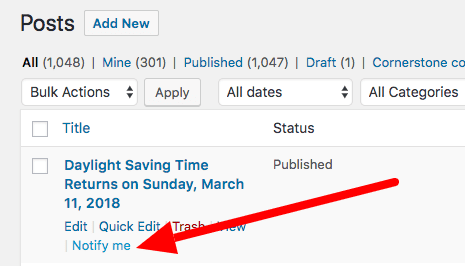 Finally, this change opens the door for much bigger changes to come.

PublishPress customers have asked for much more detailed and granular permissions:

The good news is that this move allows us to solve these requests.

In the next few days, look for a new version of the Permissions add-on that allows you far more control than it does today. (Update: it's here)

Please let us know if you have any questions about these changes: [email protected]. We love to hear from you!